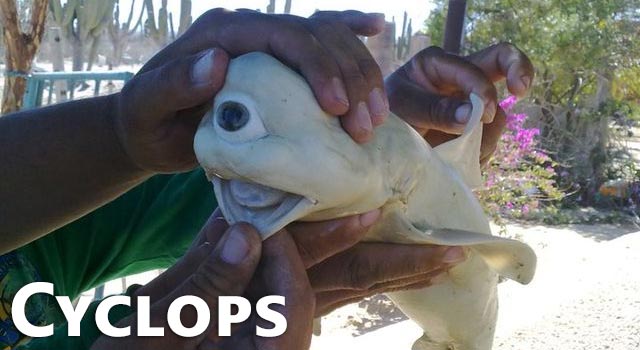 Ray's Take: I think Pat is still worried about animals taking over the world, and who knows...maybe he's right. What I see when I look at this picture though is a shark. With one eye. Pretty cool...plus he's albino. Now I finally know what we need here at Bro Council to finish off our exotic aquarium - an albino, cyclops-shark with zebra stripes. Yeah, we're one-uppers here.

Now, I'm usually pretty skeptical about internet pictures. But this one looks to be real. According to the site, this "Cyclops shark, sliced from the belly of a pregnant mama dusky shark caught by a commercial fisherman in the Gulf of California earlier this summer, is by all reports the real thing. Shark researchers have examined the preserved creature and found that its single eye is made of functional optical tissue, they said last week. It's unlikely, however, that the malformed creature would have survived outside the womb."

I did a little research (very little) and it seems like people and animals have been born as cyclops, but they tend not to live long. Except James Marsden...that dude's like 38. Man...I'm good at research.