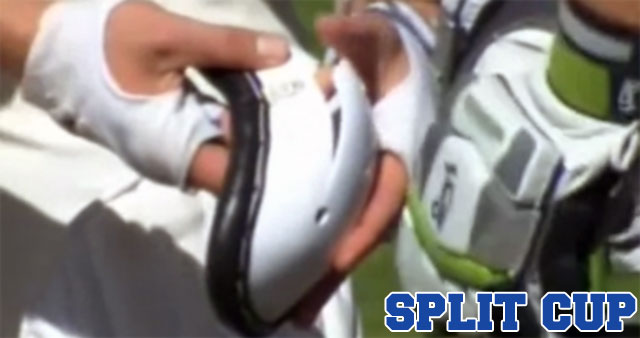 Here in the colonies we know squat about cricket. I'll be the first to admit it, I'd sooner watch hillbilly merry-go-around (aka NASCAR) before cricket. That was until I saw there was a chance of the injury you'll see below. As a guy, there's nothing funnier (or more painful) than seeing another guy get smashed in the plums. Playing baseball and doing some catching, I took a foul tip or two to the business and it's not pleasant. But I never felt anything like this.

Bear with me as I do my best here to explain cricket using something we all know: baseball. The New Zealand "batter" Kane Williamson took an 86 mph throw to a very sensitive area. This was such a big hit that it actually cracked his cup. Yes you read that right...my stomach already hurts.

There doesn't appear to be a lot of love lost by these two teams. The South African "pitcher" Dale Steyn watched the results of his throw, then calmly and coldly announced "that looked like it hurt, but I'm not gonna apologize."

While all this is going on the announcers are discussing the physics of the play and injury, when they bring up a great point about a cracked cup; be wary of the pinch.

So go ahead watch the play, and then laugh since it wasn't you. We know you will. (Editor's Note: We made it almost through the whole article without censoring Pat, but we had to edit out this last line. If you want to know the joke he posted, you can ask him @pat11d on Twitter.)