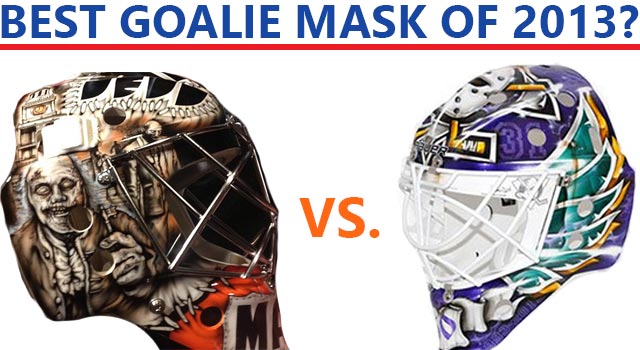 We announced in August that Steve Mason of the Philadelphia Flyers was creating a zombie-inspired goalie mask that featured an undead Ben Franklin for the upcoming NHL season. Unfortunately, the mask was still in the early stages, but wow we get to see the final product. And it looks as amazing as we expected it to look.

Betsy Ross is on one side and Ben Franklin is on the other, and they're both un-dead.

Not enough for you? Well, how about the fact that Betsy Ross is stitching the Flyers logo to the top of the mask? Or that George Washington makes an appearance on the back of the mask?

When he was designing the mask, artist Franny Drummond of PaintZoo described what Mason was looking for to NHL.com:

Mason said, "I want horror, but without a horror movie, why don't we do Ben Franklin as a zombie? And I said...I guess we could do it...I'll do sketches, over the summer we'll go back and forth over design work, and this is basically what I came up with. Betsy Ross, historical figures, and taking it and making it into a zombie apocalypse that hit Philadelphia in 1776.

Drummond nailed it. Goalie mask of the year though? Not so fast! The Anaheim Ducks have a contender.

Ducks goalie Viktor Fasth is wearing a mask with the original Mighty Ducks logo plastered across the front. It's old-school, it's purple and teal, and it's designed by Dave Gunnarsson, a master mask artist. Gunnarsson had this to say about the mask on his Facebook page:

The tribute design is created as a homage to the very first Mighty Ducks mask of Guy Hebert, designed by the legendary Dennis Simone and mask maker Ed Cubberly. Same layout and colors, but created with the latest effects. On a distance it is a classic old school design, and when you come closer you will discover all the details and the mask enters a new dimension with all the ‪#‎DAVEART‬ trademarks effects. Among the details you will find the Duck years, Hebert's player number and much more. 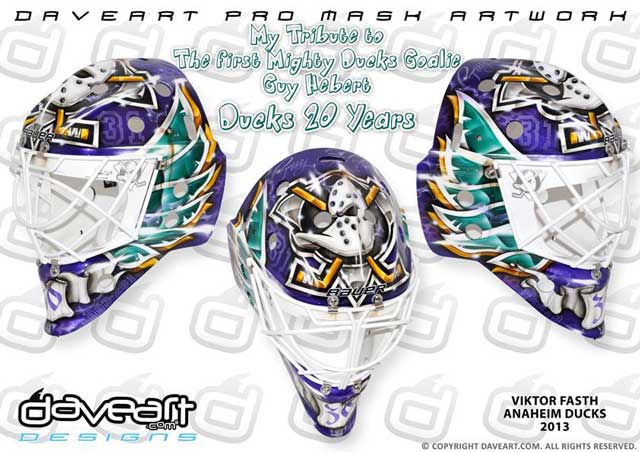 Plus, the Ducks will be wearing their classic logo on some throwback jerseys on October 13, so this will be a match made in Estevez Heaven.

Who wins; the Ben Franklin un-dead zombie mask or the Mighty Ducks throwback teal and purple?