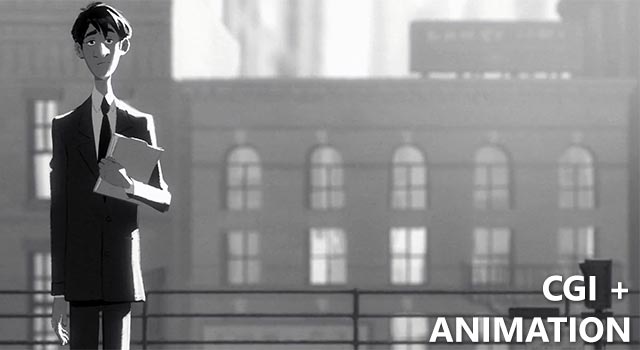 If you haven't seen the movie Wreck It Ralph then you missed out on seeing Disney's new black and white hybrid animation short that was nominated for an Oscar this year. The six minute short called Paperman is the the first animated film to combine old school hand drawn animation and CGI computer graphics.

Here's what Disney had to say about the film:

First-time director John Kahrs takes the art of animation in a bold new direction with the Oscar®-nominated short, "Paperman." Using a minimalist black-and-white style, the short follows the story of a lonely young man in mid-century New York City, whose destiny takes an unexpected turn after a chance meeting with a beautiful woman on his morning commute. Convinced the girl of his dreams is gone forever, he gets a second chance when he spots her in a skyscraper window across the avenue from his office. With only his heart, imagination and a stack of papers to get her attention, his efforts are no match for what the fates have in store for him. Created by a small, innovative team working at Walt Disney Animation Studios, "Paperman" pushes the animation medium in an exciting new direction.

It's a great new technique, and we think it proves that 2D animation is full of the same amount of emotion and expression that 3D movies are capable of. Who are we to judge though, check it out for yourself below: