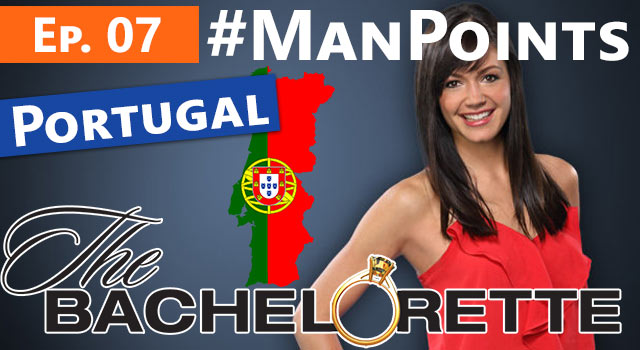 The continuing series commenting on ABC's The Bachelorette from a man's point of view. Our own Matt Truck (@BroTruck) watches the show with his wife and awards points based on many factors, all of which test whether or not the act on the show is "Bro Council, Approved." Each positive "manly" act gets a +, while - points are deducted for things that aren't as flattering to your manhood. You can check out the ground rules here.

Des and the final five head off to Madeira, Portugal, an island off the coast of Africa. This is a big week, with three one-on-ones and a two-on-one date. All the guys need time, as the final four will get to bring Des home to meet their families.

Brooks takes island living seriously, as he comes out wearing jorts. Later we see him rocking a denim shirt under a cardigan. Nothing says love like a Canadian tuxedo. (+1)

Des invites Catherine, Jackie, and Lesley from last season out to Portugal to dish about the guys and help get some perspective. Remarkably, the guys just happen to get outside for some spontaneous ball tossing and general merriment...on a cloudy day...for no apparent reason...within binocular shot of where the girls are sitting. I love these choreographed sequences.

Brooks gets the first one-on-one. He and Des drive around Madeira to the top of the island, then enjoy wine and cheese on top of a rock amidst the clouds. They spend some time in conversation about life after the Bachelorette while surrounded by clouds. This was the week of "love similes". Brooks compared love to being amidst the clouds; Chris wrote a poem; Michael G. compared love to letting go; Drew/Zak W. noted love was akin to going full throttle on a track. Somewhere an English teacher is smiling.

Brooks and Des eat dinner on a rooftop under candlelight. In talking about the possibility of Des meeting his family, Brooks lets us know that he's a family guy, taking his loved ones super seriously. Nicolas Cage isn't the only Family Man (+1). They enjoy fireworks on the rooftop, and Des intimates in her interview that Brooks could be the guy for her.

Chris gets the second one on one. The go sailing on a yacht, then enjoy a picnic by the ocean. They compose a poem together, and place it into a bottle to throw into the ocean for some unsuspecting person to find in the future. I couldn't help but thinking about Gob in Arrested Development. We've known all season that Chris was a minor league pitcher, but what does he do with the one opportunity he has to show off the canon? He flicks the bottle into the ocean with a side arm frisbee motion. Come on, bro! (-1) In the evening, as Chris prepares to tell Des that he loves her, he starts sweating and clumsily kicks the champagne ice bin. When I proposed to my wife I nearly blacked out, so I feel you Chris (+1).

Michael G. gets the third one on one. He and Des explore the city (if we've learned one thing, either (a) the producers were underwhelmed by the activities or (b) Des loves to walk around aimlessly). Amidst their travels, Michael downs some form of local delicacy, taking it like a champ to impress Des (+1). Afterwards, they do street tobogganing down the hill. (These things are totally sweet. +1 to the drivers, as these roads aren't wide). I wish Des had some better court awareness, however, as out of control rickety vehicles to help digest gross food doesn't seem like a good mix. Over dinner, Michael discusses his estranged relationship with his father, which he tells Des makes him to want to be a good husband and father (+1).

Zak and Drew get the two-on-one. The guys and Des do go-kart racing around a Formula One track (awesome choice, by the way). Drew and Zak coordinate outfits, both rocking the Chuck Taylors (functional style...I get it...+1). Zak beats Drew in a race by a considerable margin. I'm all for road safety, but this blowout was unacceptable for Drew. Hats off to Zak for never touching the brake (+1).

Michael G. is home. That means Brooks, Drew, Chris, and Zak W. get the home towns, which is always the zenith of the season.