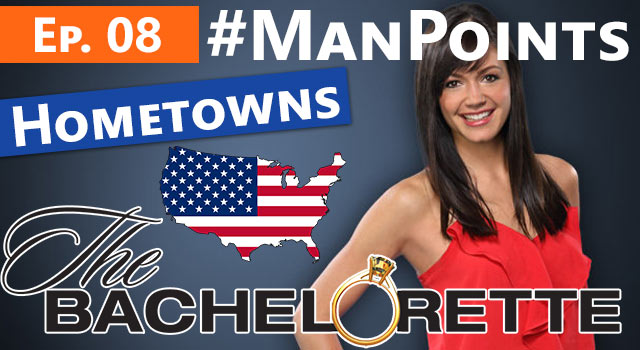 The continuing series commenting on ABC's The Bachelorette from a man's point of view. Our own Matt Truck (@BroTruck) watches the show with his wife and awards points based on many factors, all of which test whether or not the act on the show is "Bro Council, Approved." Each positive "manly" act gets a +, while - points are deducted for things that aren't as flattering to your manhood. You can check out the ground rules here.

Just as March brings us the gift of the Final Four, so a Monday in July brings us the Bachelorette hometowns. While it may not be met with as much national acclaim (except in feminine circles; that's right, I'll own watching it), it is nevertheless enjoyable to get as close to a slice of real life for these potential couples as is possible in the context of the show.

Des first travels to see Zak W. in Dallas, Texas. As a reminder, Dallas brought us Sean Lowe, and Austin brought us Brad Womack, so there is something about Texas and Man Points generation capacity. It's nice to see Des is running with a proven pool of manliness.

Zak puts Des to work as part of the family snow cone business. They drive the truck to an elementary school, where Zak dawns a penguin costume to entertain the kids. Being good with children never emptied the man card (+1). Throughout the day, it's clear that Zak is wearing a shirt that struggles to button across his pecs. I didn't know Under Armour made button downs (+1). They then go back to Zak's house to meet his family. Late in the evening, Zak tickles the guitar strings while his sister and brother sing the lyrics to a song Zak wrote for Des, which moves her to tears. He then keeps the tear ducts flowing by giving her a locket with a ring to commemorate the location that he fell in love with her (+2).

Let me start by saying that Scottsdale, AZ is one of my favorite places in the country. Great weather, nice surroundings, and dry heat (if you're in to that sort of thing). Good residence choice.

The highlight of the trip was seeing Drew's kindness and compassion towards caring for his sister, who is severely mentally handicapped. It's great to see tenderness on display (+2).

Awaiting Des' arrival, Chris is shown rocking flannel and walking through the wilderness. Strange choice for a drop-off point, but when a guy is jonesing for a little outdoors time, don't tell him no (+1). Chris takes Des to the baseball diamond that he grew up playing on, playing catch and taking batting practice to show off for his woman (who among us hasn't done this? I know I have!) (+1). Never mind the fact that he's using a metal bat on a sub 200-foot diamond. I digress. Back at the house, Chris' dad, a chiropractor, worked on Des' back on his table to get to know her better (I've always thought that you don't know someone until you've assessed their lumbar alignment anyway). Chris makes it clear that he desires his mom's approval, and is downright gleeful when he gets it. It's great to see a son love his mom (+1).

Brooks takes Des to a picnic in a park, where we see another one of Brooks' Burberry-patterned throw blankets (the subtle stars of this season). They then take on some canoeing in a self-contained body of water before going to meet the family, who smartly wore "Hello My Name Is" tags to ease the memory burden. Brooks seeks out honest feedback from his sister to try to assuage some of his concerns about knowing where his relationship with Des is. No man is an island (+1).

After the dates are over, Des meets to talk with her brother, Nate, a story from last season after he may have been a big reason for Des' departure after hometowns. He seems supportive of Des in this process, but that doesn't stop him from conspicuously lurking in the lobby to try to catch a glimpse of the guys.

The rose ceremony comes, and Zak W. gets sent home. It clearly seems that Des is pretty smitten with Brooks at this point (second position on the leaderboard), but I have to say that I was super bummed with Zak being dismissed. To me, this is an absolute crime, and our Man Points leader got sent home way too early. He took it like a gentleman, showing grace in the process (+1). Out of sheer principle, I refuse to put him in the "Eliminated" column. I refuse to believe that my scoring system has failed...for now.